Urune, located in the neighborhood Txakale, part of the municipality of Muxika (Biscay) and it is in the slope of the Atxeli Mountain with an excellent view to Gernika-Lumo and the estuary of Urdaibai. It is the territory located more in the south of the region of Busturialdea and hereby we can say it is the entrance to the Reserve.. 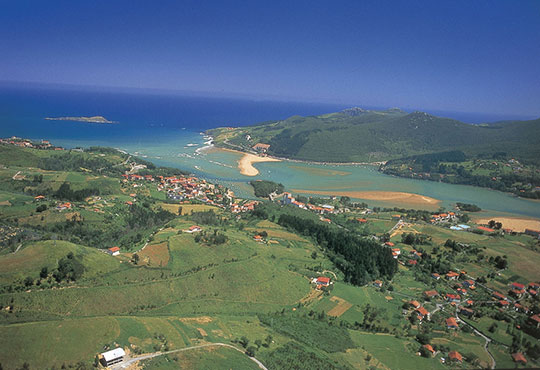 Urdaibai is the natural area in the region of Busturialdea (Biscay). This estuary is located at the mouth of the river Oka and it is ecologically very rich. That’s why; it was declared by UNESCO, in 1984, as Biosphere Reserve of Urdaibai, with the main goal of preserve the natural systems, the biological diversity and rational use of its resources. Urdaibai is source of life. 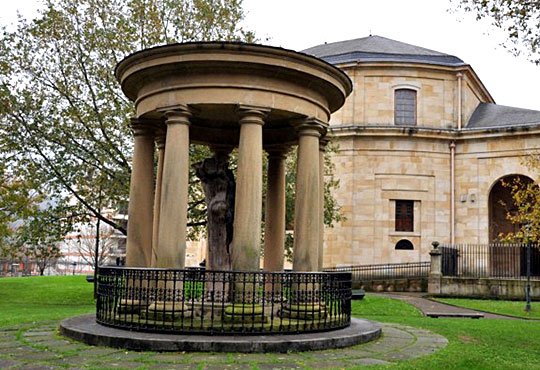 In this village is located the Assembly House (Casa de Juntas) of Gernika, emblematic place for all Basque citizens, with the symbolic tree in its outside. Known as the “Tree of Gernika”, under which the ancient Biscayan laws (fueros) were drew up and where the Sirs of Biscay swore to respect them in order to become Castilian Kings. Nowadays, the Juntas Generales (general assemblies) of Biscay are there and the Lehendakari (President of the Basque Autonomy Community) and the general deputy of the province swear their posts.
In 1937 the village was totally destroyed by the German Legion Condor; send by Hitler, with the collaboration of the army of Franco. Just four hours were enough to demolish the village. These facts inspired Pablo Picasso to paint “Guernica”, a painting considered one of the most important of the XX Century. Nowadays, the monuments “ Gure Aitaren Etxea” of Eduardo Chillida and “ Large Figure in a Shelter” Herny Moore represent Gernika-Lumo as City of Peace, together with the Museum of Peace dedicated to the bombing suffered on the 26th April 1937. 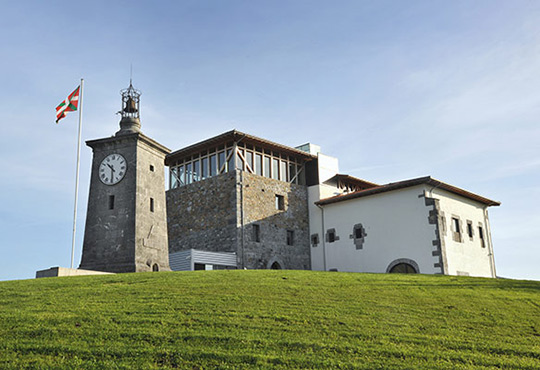 From Torre Madariaga, Basque Biodiversity Interpretation Centre, reference on the diffusion and awareness on biodiversity of the Basque Country, can be sight the whole area of Urdaibai. 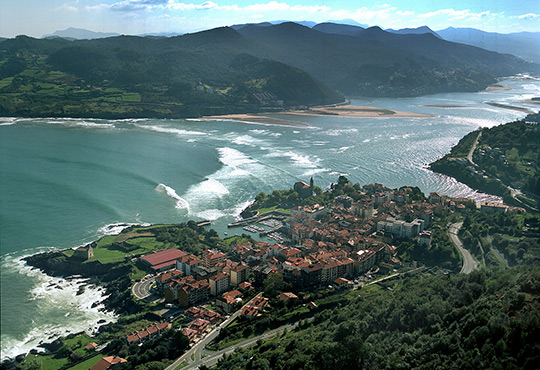 Municipality located at the mouth of the river. It has magnificent viewpoints to the sand of the surrounding beaches and dunes. This town was traditionally involved in fishing and see commerce but nowadays it is a tourist town and privileged place to practice Surf. Its wave is considered one of the best left waves of the world and every year takes place the Billabong Pro Mundaka, ninth probe in the ASP World Tour. 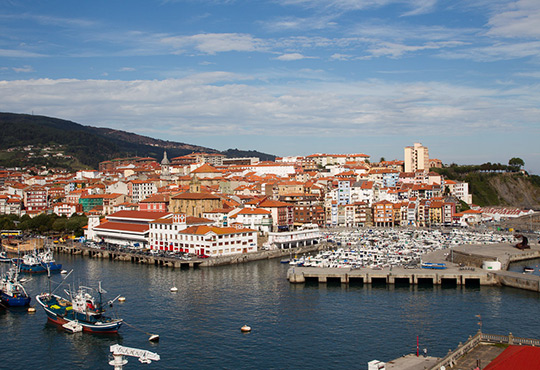 Together with Gernika is the head town of the region Busturialdea-Urdaibai. This town has a long maritime tradition and its economy is based mainly on the fishery and canned fish. During years, the sailors from Bermeo had built up their colorful houses in front of the sea and painted them with different colors in order to identify each house with their ship. It is a very particular place, where every corner remember us the unity between its inhabitants and the sea. Its tourist attraction is based on the picturesque haven, the fishermen neighborhood, its warm old quarter, its small coves and cliffs and its typical gastronomy. 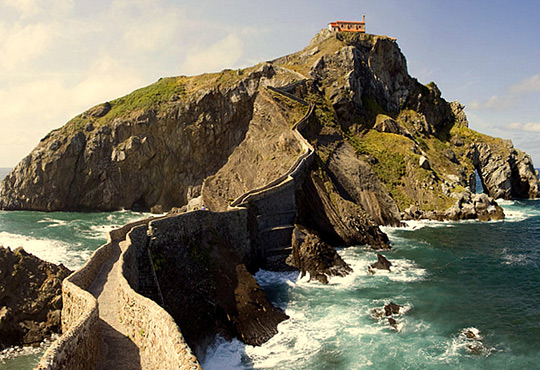 Access into this island, at the Biscayan coast between Bakio and Bermeo, has to be through a bridge of stone, walking up 231 steps. On the top, we can find a chapel from the X Century, which could have been a monastery. The chapel has suffered many attacks, plunders, fires, so that nowadays it is totally rebuilt. Pirates and privateers have crossed through it. 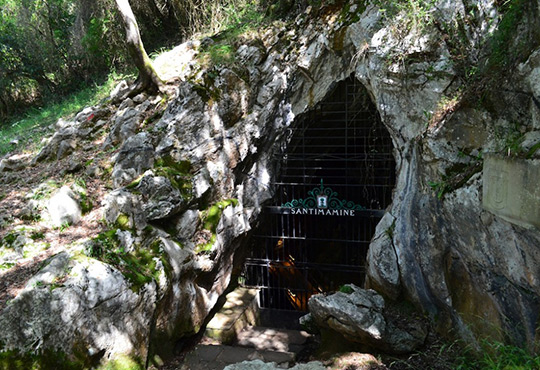 It is located in the municipality of Kortezubi, close to the chapel of Santimamine, taking its name from it. It is on the basin of the natural park of Urdaibai. It is considered the main pre-historic site and culture icon of Biscay, also declared World Heritage (Patrimonio de la Humanidad) by the UNESCO (Unesco) since 2008. It has been discovered at the beginning of the XX Century and there have been founded rests and cave paintings from the Upper Paleolithic (Paleolítico Superior.).
Close to the cave, becoming a whole tourist set, we can find the Forest of Oma, (bosque de Oma), also called the Enchanted Forest of Oma, an artistic work made by the painter and Basque sculptor Agustín Ibarrola and it is a group of pines which trunks are painted and depending on the position of the observer, form different figures. 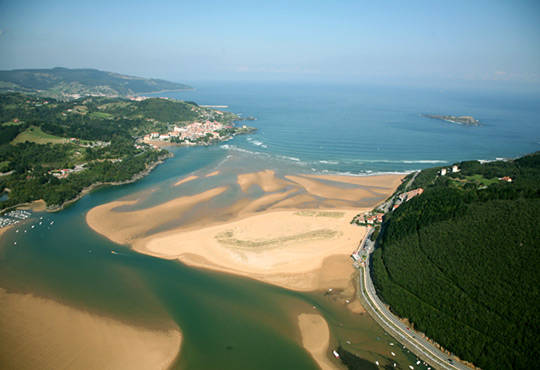 It is a beach with dunes located at the mouth of the river Oka. It is a privileged place thanks to its extraordinary views: The Bay of Biscay, the island of Izaro, Mundaka, mountains and the marshes created by the river. During the 90s, due to the erosion, almost 50% of its extension was lost, so that, right now there are developing a regeneration project of its dunes in order to recover the disappeared ecosystem. 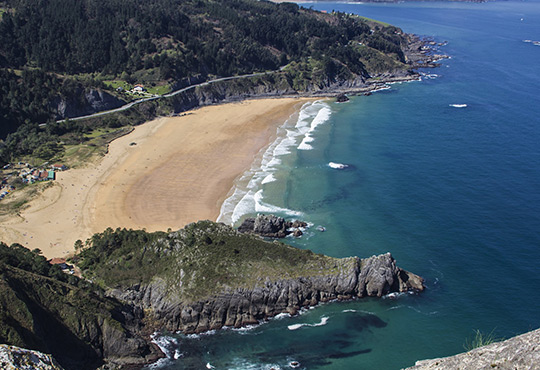 Beach of dunes, open to the Bay of Biscay, located in the Reserve close to Cap Ogoño, from we can delight the beautiful views marked by the impressive fusion of sea and mountain. At the middle of the XX Century, it lost its dune system, thus, there is a project to protect, conserve and recover this especially interesting natural resource. 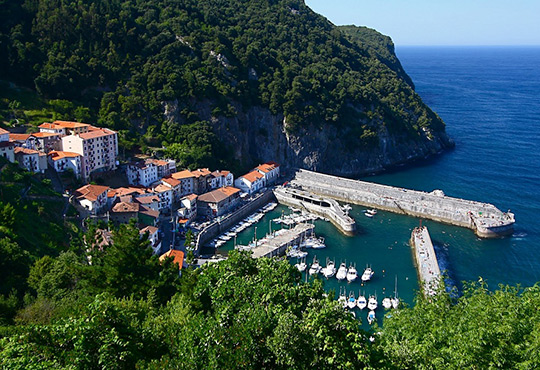 It is a small municipality located at the east slope of the rocky mass of Ogoño Cap (Cabo Ogoño)- which protects the ancient fish port and currently sport port- which its enormous inclination forms a whole of narrow and steep streets. This placement obliges the town to have two separated entries to get in, one directly down towards the port and the other to the highest part with a magnificent view point, a small square and a surprising revolving platform in order to able buses revolve and leave the town. 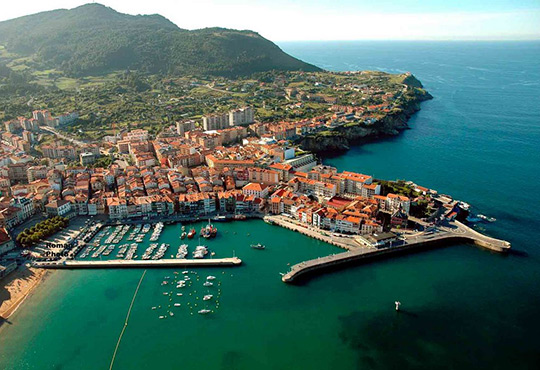 It is a village located at the Basque coast, lies on the slope of the mountains Otoio and Lumentza, which slowly drops towards the sea. It has been a village of fishermen, basically of wale fishing. During the period between 1500 and 1900 was the second biggest fisher port in Biscay, following Bermeo. Time gone and the crisis of the fish sector have focused Lekeitio towards tourism. We can find the architectonic reference of the Basilica de la Asuncion de Santa Maria of Lekeitio with a late gothic style in Biscay, which attracts the attention because the magnificent gothic fabric, the sculpture of the occidental façade and a rich furnishing.